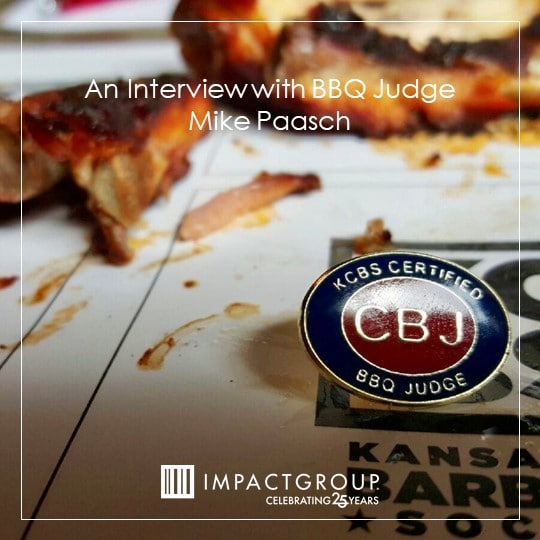 Master BBQ Judge Mike Paasch is a former Impact Group Division Manager, and the perfect person to help us kick off grilling season. Mike and his wife Marcia travel the US attending BBQ competitions and documenting their journey in words and photos. Mike’s love of BBQ stemmed from his time in Kansas City, a very good town to fall in love with BBQ in, and has stretched into the world of competitions and restaurant ownership. He doesn’t just judge BBQ competitions either, he puts his money where his mouth is competing alongside his restaurant partners as well – together they’ve won grand championships. To say that Mike is BBQ crazy… actually seems about right.

Though Mike admitted that his favorite style of BBQ is Kansas City, he explained that regional differences aren’t the focus of KCBS (Kansas City BBQ Society) competitions, “rather than texas style, or carolina style, it is referred to as competition style bbq. The flavors are homogenized to appeal to a diverse spectrum of judges, with a much richer flavor.” At a competition six judges are scoring on a scale of 1 – 9 (disqualified – excellent) in a double-blind format. The judges focus on appearance, tenderness, texture, and taste of four different BBQ components: chicken, ribs, pork shoulder or butt, and brisket – each is presented in a number marked tray and reviewed alongside five other competitors arrayed on a judging plate. The cuts come out in waves 30 minutes apart, that’s a lot of BBQ!

Mike broke down the process, explaining that they are up and moving by 2am to light the fires – “while there is down time throughout the day, we are mostly rolling all day long.” Tending the smoke and prepping the sauces is work, but “the final two hours, when entries are being turned in, is intense.” Prize money can range from $7k to over $25k depending on the event, but Mike is quick to point out that “everyone is doing it for the love. The competition is a lot of work, but it is a lot of fun, and really a community.” If someone needs an ingredient or tool no one hesitates to lend a hand; though trade secrets are kept secret, especially as deadlines near.

When asked what time a cold beer fits into the schedule Mike laughed, “we keep the cooler close throughout the competition. For some reason at 9:22am everyone does a whiskey shot, I don’t know why, but it is a lot of fun!” Judges are never allowed to drink when on duty, “only water and saltines during competitions,” but competitors are left to their own devices. “It is funny to watch the rookie teams have a little too much fun during the day,” Mike confessed.

While I expected all of the competitors to cook in a similar way, Mike was quick to explain that there is a lot of variation in methodology. “Our competition smoker, ‘Blue Velvet,’ is an offset reverse smoker. The current team of the year ‘Getting Basted’ uses an oil drum direct heat smoker – which works hotter and faster. Some people use pellets rather than charcoal.” He talked about teams that build their own smokers, and others that buy very expensive RVs with grills built into the side. There is much variation and creativity in the team names (Jerry Swinefeld, Chicks with Pits) as there are in cooking methods!

Mike is also quick to point out that the BBQ circuit is not only about festivals and good times. OBR (Operation BBQ Relief) is an organization whose mission is to “provide meals to displaced residents and emergency personnel during times of natural and other disasters.” He explained how amazing it is to see the BBQ community come together to support those in need: “after a disaster we’ll come in a cook for thousands of people including first responders and people displaced by a tornado or flood.” The truth is that OBR has provided hundreds of thousands of meals after individual events to people in need of a hot meal (808,220 meals over 30 days after Hurricane Michael for example).

When Mike was first explaining to me that he travels the US in an RV with his wife, alternately judging and competing in BBQ competitions, and stopping off at beautiful state parks and meeting interesting people in small towns, I told him it sounded like he was living the dream. “I’m sure there are some difficult aspects” I said trying not to be too presumptive. He responded, “I’m sure there are too, I just haven’t come across them.”

Take a look at the world of BBQ through the eyes of Mike and Marcia Paasch on their well cultivated blog https://www.rvbbqtrail.com/