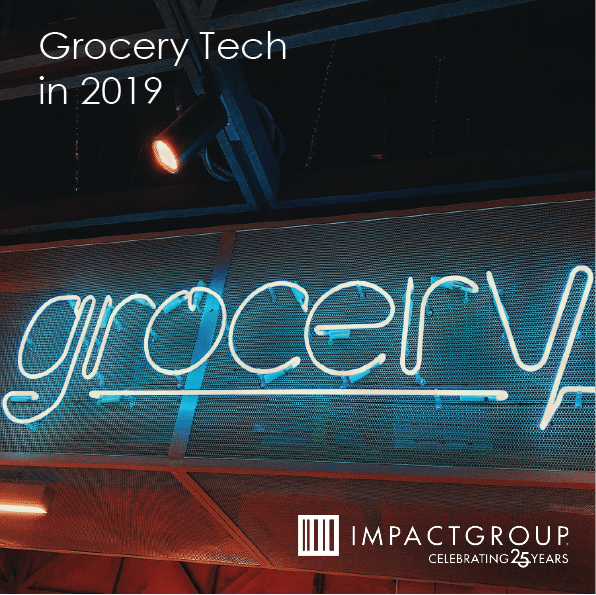 Although the modern grocery store has been around for over 100 years, the basic process of grocery shopping has remained unchanged since the creation of the first grocery outlet, Piggly Wiggly, in 1916. At the time, it was groundbreaking for patrons to be able to walk along shelves and select items themselves as opposed to be assisted from behind a counter. As technology has advanced at a rapid rate in recent years, the grocery shopping experience is beginning to be transformed.

Most technological evolutions in grocery have only affected the ancillary components of grocery shopping – digital coupons, laser scanning checkouts, electronic scanners for inventory and order processing, etc. None of these changes have required an existential shift in the basic tenants of a grocery store’s function, until a Seattle based book seller disrupted the grocery world in 2017. As soon as Amazon purchased Whole Foods, the entire industry seemed to realize the grocery industry needed to evolve to keep up with the changes.

2019 seems to be the year when a healthy dose of market disruption finally spurs on a technological leap the grocery industry has needed for some time. We have already seen the advent of cashier-less checkouts, aisle monitoring robots, and automated eComm distribution via “micro fulfillment centers.” Wide spread adoption of these advances alone would be tantamount to a revolution considering the shopping cart still used today was invented in 1937, but there looks to be more change on the horizon.

A Silicon Valley startup called Robomart, in an effort to disrupt the autonomous delivery concept before it even begins, proposes to deliver a small grocery store to you. Their mini-van sized vehicles can transport up to 1/2 ton of products including fresh dairy and produce or even hot meals for you to select in your own driveway after calling the service via app. The vehicles will initially be operated by remotely located “drivers” and restocked and recharged at localized facilities. Robomart proposes to partner with grocery chains to provide a branded delivery system that will also compile shopper data as a part of their service.

The in-store experience looks to be undergoing a rapid advancement as well. Microsoft’s recent partnerships with Kroger, Albertsons, and Wal-Mart mean that the nation’s largest retailers are proactively planning to not allow Amazon to pioneer retail grocery advancement without them. A variety of applications based on Microsoft’s Azure cloud platform target the shopper on a personal level. Digital tags can display pertinent information when a customer passes by with their cellphone, calling out items on a shopping list or recipe, promotions on commonly purchased products, or targeted advertising. Microsoft also appears to be working on a cashier-less system for these retailers to compete directly with Amazon Go.

Another interesting technological idea is the “smart cart” that modernizes the shopping cart. Without the major infrastructure necessary to outfit an entire store with new tech, “smart carts” could provide a quicker path to advancement. Caper, a startup out of Brooklyn, NY, has introduced the “smart cart” to two grocery chains thus far, with plans for 150 more stores in 2019. Their reworked shopping cart has the ability to keep a running total as you shop, including weighing produce, by scanning each item as you place it in the cart with the ultimate goal of eventually having product recognition without scanning. A screen mounted on the cart would then act as running receipt, store guide, advertising platform, and finally cashier.

All indications point to a seismic shift coming in the grocery industry in 2019 that experts are saying is long overdue. The way customers move through a grocery store, how they interact with products, and whether they even need to physically go to the store is all being redefined. As is the case with any large-scale industry changes, there will be a period of massive disruption followed by a period of cycling through the less useful ideas and digging deeper into the directions that connect with the consumer. Turmoil for the status quo will shake open new possibilities for the open and nimble minded.