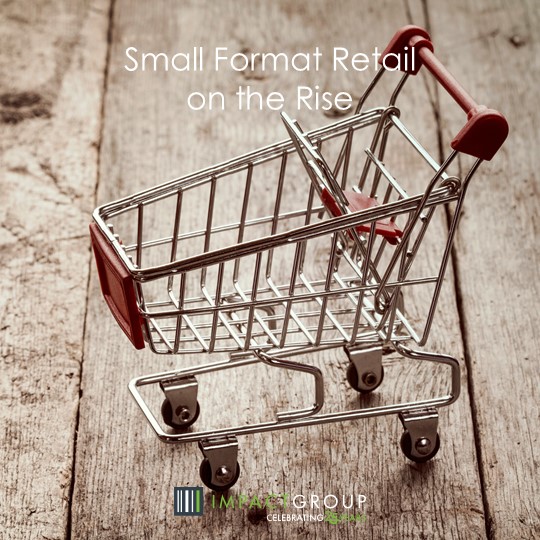 The initial forays into reduced retailer space during 2018 are leading to small format expansion in 2019.

You’d be forgiven for feeling some whiplash after learning that one of the biggest drivers of grocery store expansion is small format markets. Grocery stores have been expanding their footprints into the realm of “superstores” for decades. Along with other retailers, grocers have sought more square footage and improved parking further and further from city centers in efforts to accommodate their “big box” formats. It appears, however, that a significant amount of the 29.4 percent growth in grocery stores in 2018 was paradoxically due to many small format stores.

In 2018, Germany based retailer Aldi accounted for 16 percent of the overall growth with the opening of 82 new stores in the U.S. Add an additional 30 new Sprouts stores and 15 new Lidl stores, and you have what amounts to a small-format revolution. According to CSP, this growth is not slowing soon.

Nielsen consumer data looked into the decision-making process behind this phenomenon and found that three of the top five attributes small store shoppers prize are directly related to convenience stores, with price and value rounding out the five. However, unlike convenience stores, many grocery retailers are focusing on trend forward offerings rather than snacks, candy, and sodas.

Similar to Ahold’s new concept Stop & Shop, and Meijer’s Bridge Street Market (small formats which offer many options for on the go meals) Publix recently launched GreenWise Market in Florida with an emphasis on fresh prepared foods. However, where Stop & Shop has focused on the quick trip with curbside pick-up, GreenWise Market has a lounge and in-store dining. This store is roughly half the size of a typical Publix, with much of that space devoted to fresh baked pizza, noodle bowls, craft beer taps, and wellness focused products. The first store, in Tallahassee, will be followed by nine more stores in the next few years.

Hy-Vee has approached the puzzle from another angle, or rather two. Their new Fast & Fresh stores are geared similarly to those mentioned above, with wood-fired pizza, meal kits, sushi bar, and craft beers. The twist is its sister store, HealthMarket, which overlaps the small format ideologically, but with an entirely different focus. Health Market offers organic produce, fresh meat, and seafood, while placing a strong emphasis on healthy lifestyle products, including supplements, natural cosmetics, a full-service pharmacy with health clinic, and a sports nutrition department. Hy-Vee has essentially identified two interrelated sub-cultures and created stores for each of them.

The world of big box retailers has been watching Target’s foray into smaller scale urban stores from the periphery, and many retailers appear to have decided the direction is forward. Both Nordstrom and Ikea are opening smaller-scale showroom concepts with limited on-site inventory. These outlets will also function as order pick-up locations. Kohl’s has been downsizing the internal square footage of some of their stores for energy and retail efficiency, leaving prime real-estate unused. In an interesting twist, Kohl’s will partner with Aldi to add small format grocery inside of the existing footprint. To date, they’ve identified up to 300 locations that could adopt this format, but are starting with one store in Waukesha, Wisconsin for now.

The modern lifestyle elicits many quick trips to the grocery store and has shoppers searching for convenient meal solutions that are healthy and delicious. It’s a tall order for a full-sized grocery store, yet it appears these small focused retail concepts may best satisfy the demand.