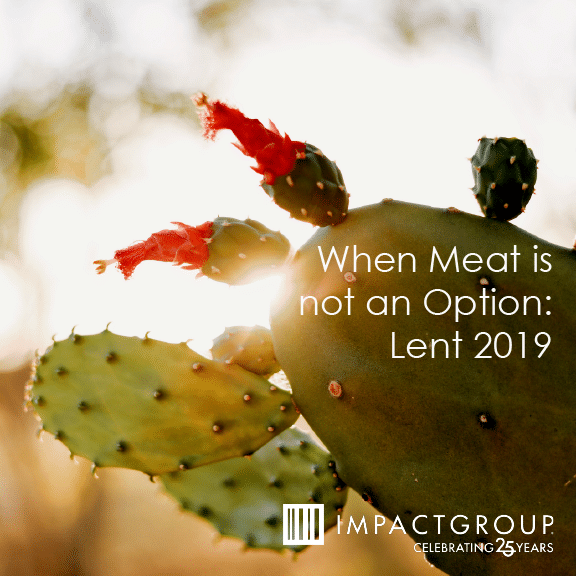 Fifty-seven percent of adult Hispanics identify as Catholic. That means there are approximately 30.4 million Hispanics and Latinos in the United States who practice Catholicism. (The Center for Applied Research in the Apostolate, 2012) Of those, many will observe Lent.

Lent is very important in the lives of Latinos and non-Latinos alike. It is the six-week period leading up to Easter. Ash Wednesday, which falls on March 6th this year, occurs 40 days before Easter and marks the beginning of Lent. During this time, many Christians prepare for Easter by observing a period of fasting, repentance, moderation, abstinence, and spiritual discipline.

While Lent is observed in many ways, one of the most common practices is omitting meat from one’s diet. Roman Catholics generally refrain from eating meat and poultry on Ash Wednesday and every Friday during Lent. So what do they eat instead?

During the observation of Lent, abstinence of meat is considered only from animals that live on land, such as chicken, cows, or pigs. As a result, many Hispanic and Latinos turn to alternatives such as fish and nopales, dramatically increasing consumer consumption during this time. In fact, Ash Wednesday is the largest sales day for frozen seafood products and the six following weeks are considered the top selling season of the entire year. (Food Services of America)

Common meals include fish soup made with pieces of fish and lima beans. Another dish consists of shrimp that is eaten raw or in patties covered with pipian, a traditional sauce made with spices and pumpkin seeds. Dried shrimp patties may also be served with sprigs of a wild plant called romerito, which resembles rosemary, along with potatoes in mole sauce.

The nopal is a flat-leafed cactus that is used in various recipes. It is a versatile food, with part being considered a vegetable and part considered a fruit. Nopales are used in salads, tacos, and mixed in eggs. Chacales is a dish made with dried white corn that is broken into pieces and made into soup. Italian squash is dried and fried with tomatoes and onions, then served with melted cheese. Canned nopalitos are also staples during Lent as a substitute for meat. Other products that have expanded consumption during lent include canned tuna, mayonnaise, and saltine crackers (saladitas).

Capiriotada is a Mexican dessert that is served during Lent. Much like bread pudding, it is made with toasted French bread, milk, cheese, butter, peanuts, and raisins. All topped with a syrup of cinnamon and brown sugar. Another common dessert are empanadas, fruit turnovers made with cherries, strawberries, apples, apricots, or blackberries.

While seafood is the most common product to increase in sales during Lent, ethnic dishes such as those mentioned present an opportunity to boost multiple categories’ sales. Providing consumers with what they are looking for or offering new suggestions is only made possible through understanding culture. With Hispanics making up 18.1 percent of the nation’s total population, they are the nation’s largest ethnic or racial minority (U.S. Census, 2018), making their culture a good place to start!